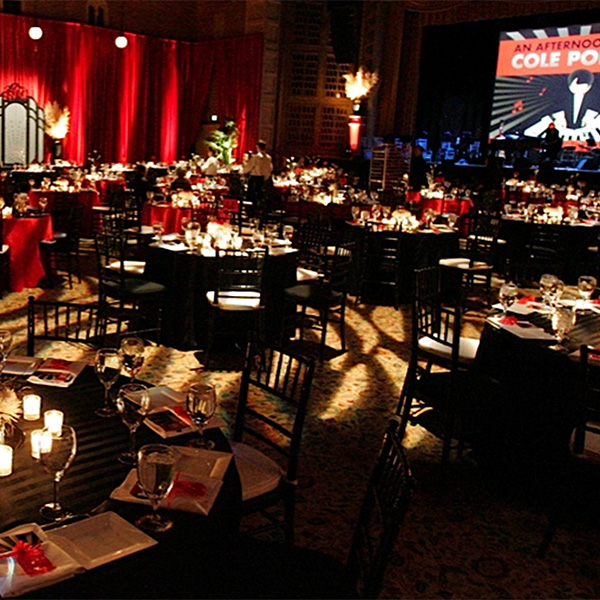 Such an elegant afternoon! Arlene and Harold Schnitzer created an over-the-top event transforming Kridel Ballroom into a nostalgic 1940’s supper club. The packed ballroom of nearly 400 patrons was full of Portland’s glitterati. It was truly THE spring society event.

It was a marvelous Sunday afternoon and nearly $250,000 was raised for the Harold Schnitzer Diabetes Health Center at Oregon Health & Science University and for the Portland Chamber Orchestra.

Fundraising Entertainment at it’s Most Elegant

Even though the Kridel Grand ballroom is a massive room, we were able to work with fewer musicians than you might expect and performed this show with an orchestra of 20 musicians. Professional sound works wonders in any size space.

An Afternoon with Cole Porter 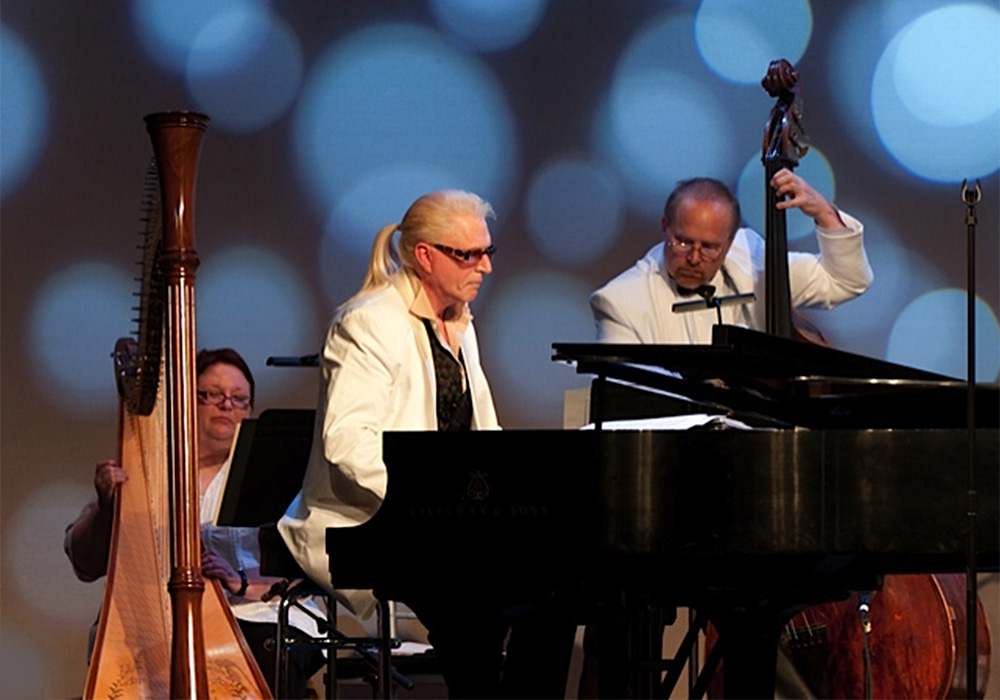 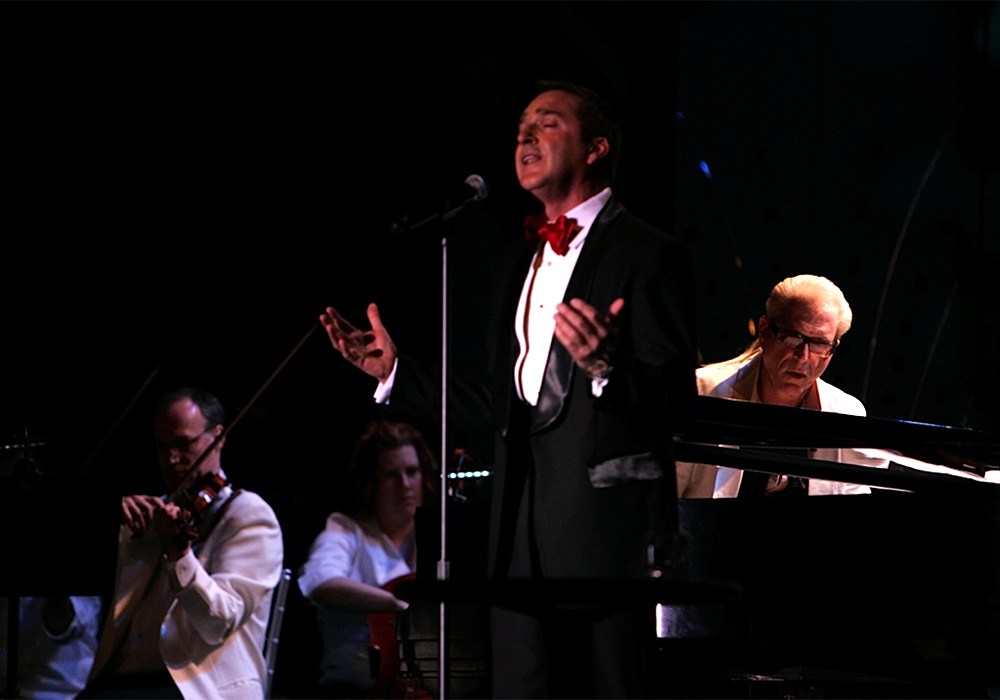 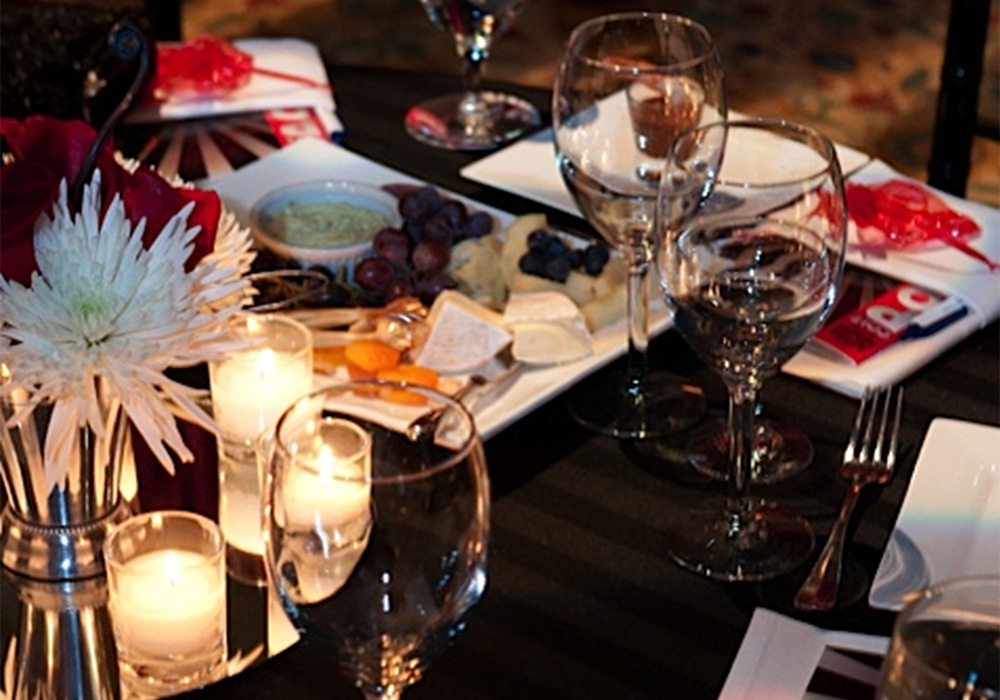 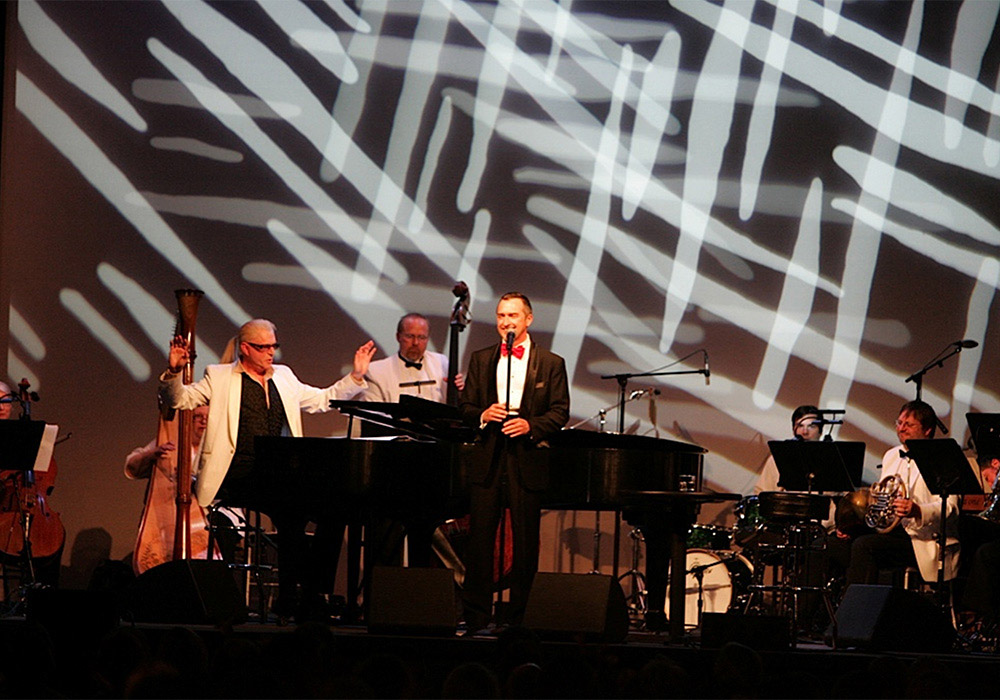 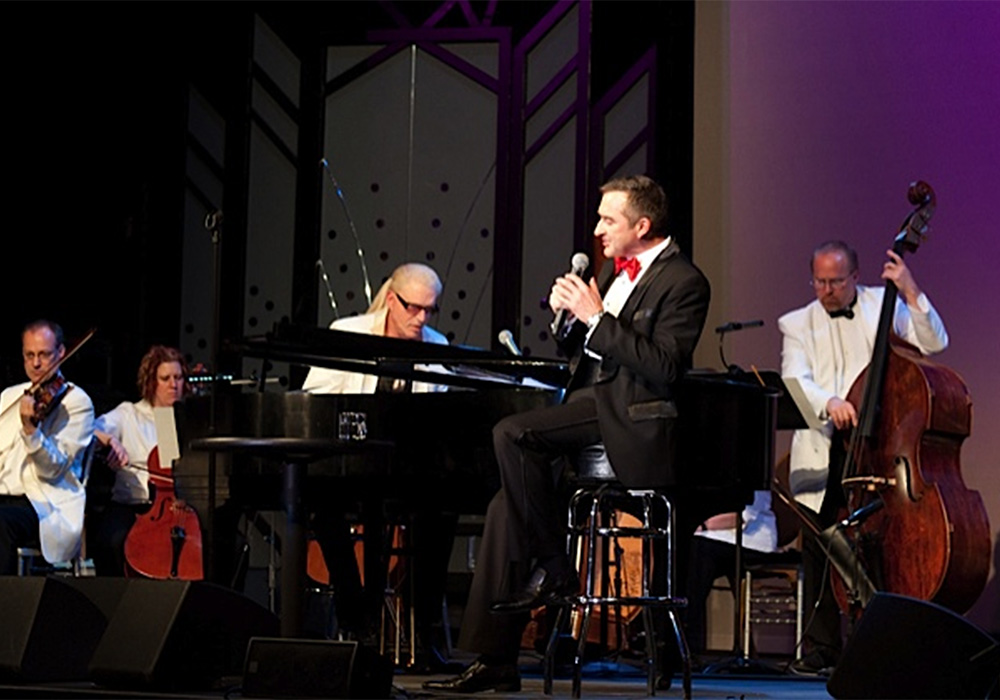 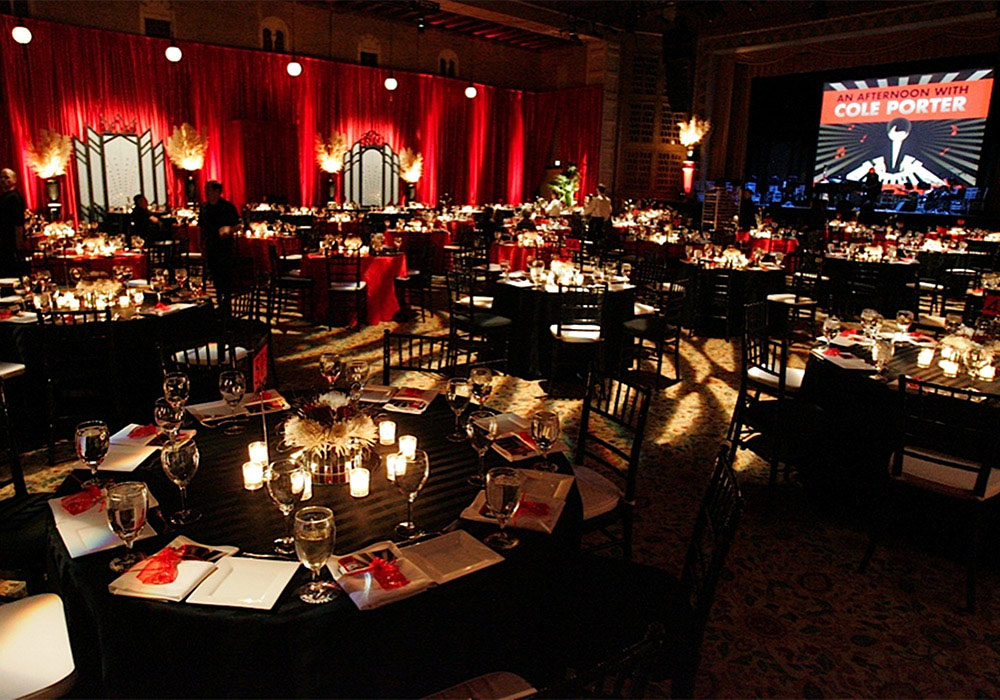 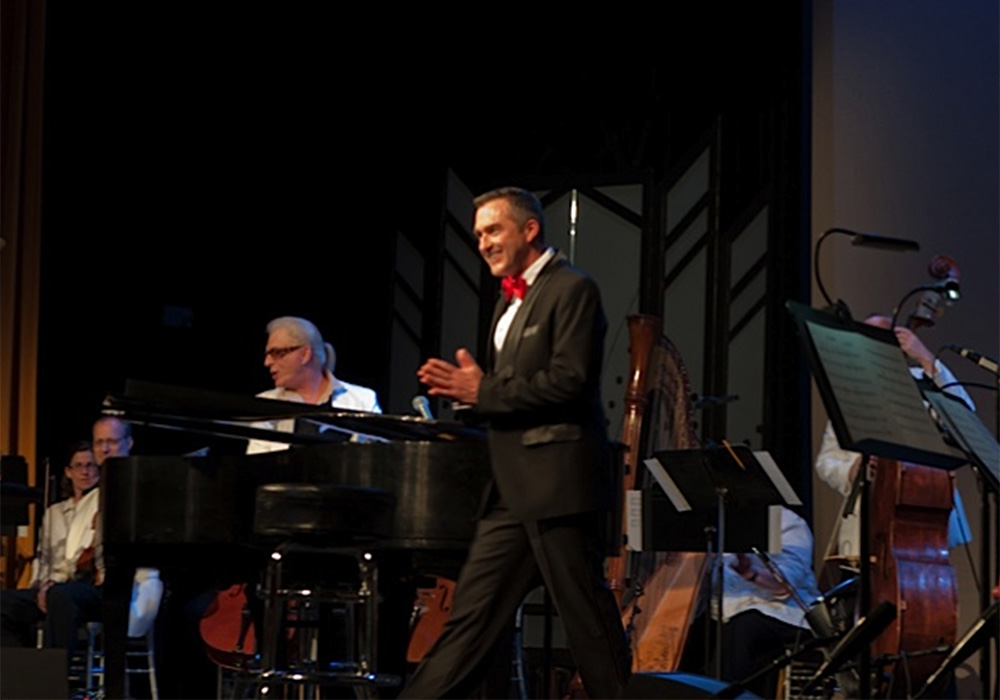 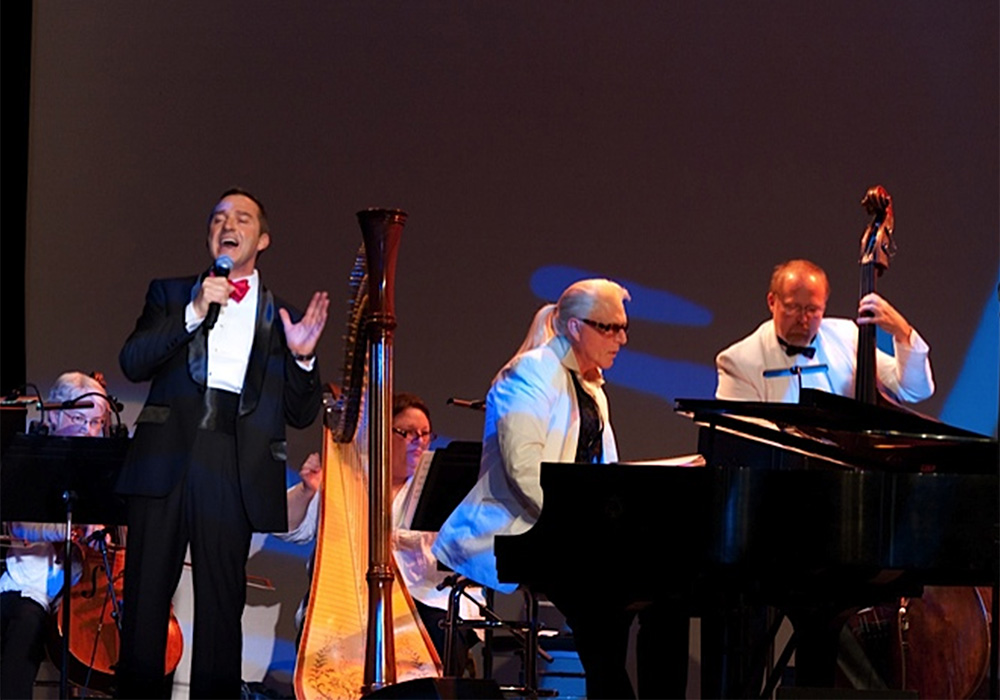 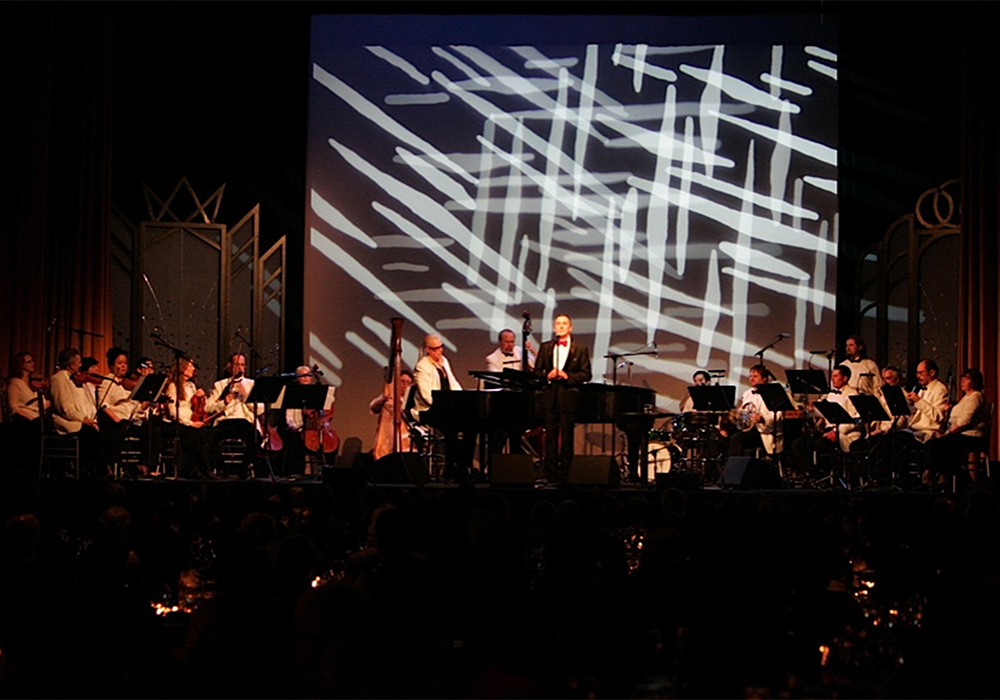 The Schnitzer’s have given tirelessly providing free care for Oregonians dealing with diabetes.  Sadly, Harold passed away on April 27th 2011, just 5 days before the event.  Harold and Arlene heard this Cole Porter show in Eden Hall in Gleneden Beach the previous summer and loved the show so much, they wanted to create a joint benefit for the Schnitzer Diabetes Health Center and the Portland Chamber Orchestra (PCO).  Arlene’s sister, June Nagel played with the PCO many times from its inception in 1947 and June’s son later became its concertmaster.  It was an honor to be a part of this exquisite event.

Ed Dixon - Manager, WW Symphony
Rocky’s evening of Cole Porter hit songs was polished, classy and heartfelt.  His singing brought back an era of musical delights when popular songs were truly works of art.  What a fun concert it was!!

Carol Boyle Schrader
What I love most about Rocky’s Kundalini Yoga sessions is that they made yoga accessible for me. Rocky made me welcome, suggested modifications and was so encouraging that it made me feel more confident. Rocky’s personal touch, deep knowledge of kundalini and zest for us all to live better is habit-forming (in a good way!). The breath work has eased my asthma symptoms greatly, which keeps me coming back for more!

Roberta - Stanford, CA
Rocky, I am so grateful to you for your expertise and your generosity as a teacher. The result for your students is a magical integration of body, mind, and spirit that leads to a more joyous appreciation of the world around us.

Kurt Alexander
I joined his kundalini class in September, 2019, and still practice with him at every opportunity. His practice, I find, is gentle for the elder person, like myself. It includes extensive meditation, especially with meditative breathing. I have always been a very factual, hands-on scientific type person. And I still am such a person. Rocky makes me see a bit beyond. He has made me think reflectively like I have not before. I value this expanded scope of vision. I thank him so much.

Noah Griffin - The Cole Porter Society
Your Cole Porter CD arrived but a week or so ago and it was worth the wait. The love and appreciation of his genius shines through in your arrangements and interpretation of his tmeless work. Your voice to me incorporates the best of Anthony Newly and Michael Feinstein. the cover art reflects the taste and sophistication of the composer you honor. Well done my friend and thanks for sending it along!

Suzanne
What a gift to be invited to share to share the rarified space with this wonderful group. While I have studied yoga for a couple years, I was new to Kundalini when I began classes with you, Rocky. I am so impressed with the Kriyas and the way you have woven them together to really give rotating attention to all areas of the body, mind, and spirit. Through meditation, breath-work, and some killer arm sets, I have appreciation for this new-found style of yoga and for you as our wonderful instructo… END_OF_DOCUMENT_TOKEN_TO_BE_REPLACED