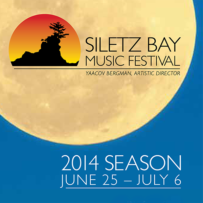 This year, many festival performances will be held at either the Lincoln City Cultural Center or the Salishan Spa & Golf Resort, a scenic property ten minutes to the South and at the foot of Siletz Bay. Both locations are close enough to walk the water’s edge, and the surrounding natural beauty is a treat indeed!

All About The Siletz Bay Music Festival

The Siletz Bay Music Festival is dedicated to providing cultural enrichment through musical performances and education as they bring internationally renowned musicians to perform on the Oregon coast.

Educating Area Youth with a Passion for Music

Education is a cornerstone of The Siletz Bay Music Festival. It engages children through master classes, children’s concerts, lectures, and in-school demonstrations. One of the things I really love is that all festival rehearsals are open to the public! This really enhances the experience and encourages more interaction between music students, professional musicians, and the local community at large.

Festival events for children, in past seasons, have included special concerts designed to introduce classical music to young audiences. When the music is paired with visual accompaniments and storytelling narrations, the outcome is magical. In a day and age where there have been deep cuts in education budgets programs offered to area children by The Siletz Bay Music Festival are a gift to the Lincoln City community and the area in general

The rarified air of the Oregon Coast is infused each year with the talent of world-class musicians. That these talented masters are available to instruct and interact with area students is a such a unique opportunity. I am privileged to continue to be a part of it all.

Join the “Baritones” at The Siletz Bay Music Festival

If you are available to come to any of the performances, it would be wonderful to see you! Especially at the Artist Showcase Fundraiser 4pm on Sunday, July 6th, where Ron Spivak and I will perform our favorites from my latest fundraising show, “It’s Better with a Baritone!” Tickets are available Online or by calling 541-992-1131.