The debut of “Oh Those Gershwin Boys,” a new Gershwin Musical Review at the fundraising gala for the Harold Schnitzer Diabetes Health Center, at Oregon Health &  Science University (OHSU). For many Americans, composer George Gershwin is thought to be a national treasure. “Oh, Those Gershwin Boys!” takes you on a musical journey through Gershwin’s 1930’s Broadway shows and the golden age of film. It features Gershwin hits and brilliant gems coaxed from the archives. Gershwin’s music and lyrics are witty, fun and delightfully romantic! Join us the first Sunday in June for a memorable afternoon re-living the grand Gershwin legacy through the eyes of his brother, Ira Gershwin, and George’s good friend and collaborator, Kay Swift.

About Businessman and Philanthropist Harold Schnitzer

Harold Schnitzer, was an highly-regarded businessman, civic leader, and philanthropist. Schnitzer is remembered for having made many generous charitable gifts over the course of his lifetime. As a diabetic, who passed away in 2011, he dreamed of creating a center to serve both juvenile and adult diabetes patient groups in one location. Unique in this regard, the Harold Schnitzer Diabetes Health Center, at Oregon Health &  Science University, is the beneficiary of this fundraising gala. 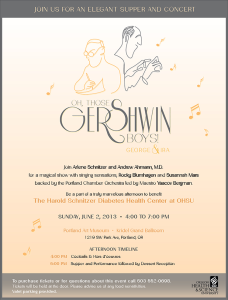 Suzanne
What a gift to be invited to share to share the rarified space with this wonderful group. While I have studied yoga for a couple years, I was new to Kundalini when I began classes with you, Rocky. I am so impressed with the Kriyas and the way you have woven them together to really give rotating attention to all areas of the body, mind, and spirit. Through meditation, breath-work, and some killer arm sets, I have appreciation for this new-found style of yoga and for you as our wonderful instructo… END_OF_DOCUMENT_TOKEN_TO_BE_REPLACED

Janet
You are skilled, talented and have a wonderful ability to explain both concepts and details in warmest way. You understand all of our different levels o