Home » Benefit and Fundraising Entertainment » Musings After “An Affair to Remember”

Musings After “An Affair to Remember” 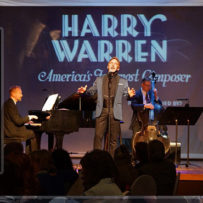 It isn’t often I feel like a home run with a performance. There is always something missed, a lyric, a patter glitch etc. These are things the audience would never see, but as a performer, you know. But Saturday night it was different. The stars ALL lined up and the performance guides shined on me and allowed me to be relaxed and totally in the moment, adding patter and humor, staying present and loving while telling the Harry Warren story. And the audience was awesome. So, if I never ever performed again, it is a wonderful memory of what it is like to be on stage totally in the flow of the moment. A rare and magical thing. 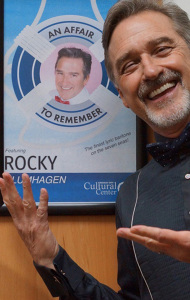 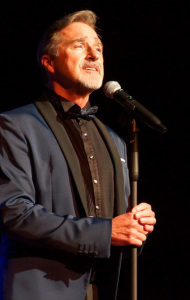 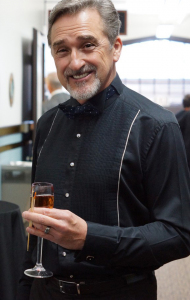 I loved the little poster they had placed around as you headed into the performance space.  They turned the Cultural Center into a cruise ship theme, from the 1950’s movies Cary Grant/Deborah Kerr “An Affair to Remember.”  And tech guru Gray Eubank created a fantastic slide show all of Harry Warren photos and photos of sheet music that played behind me while I told and sang the Harry Warren story.

It was a magical evening from start to finish. It was such a beautifully executed gala. Rich said It was “A big city gala with small town flavor!” That is a great combination! 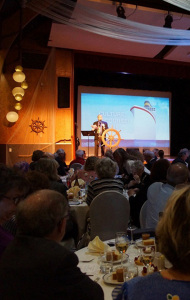 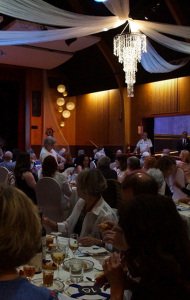 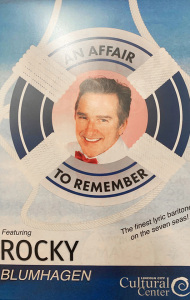 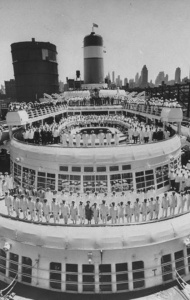 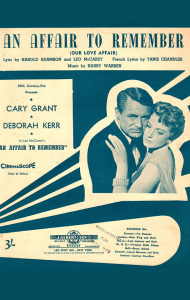 And Speaking of Transformations

One unscripted moment I can share with you now is something I had never shared on stage before.  I had invited my sister and brother-in-law up on stage for the sing-a-long since they had both been music teachers and thought they might add to audience involvement.

After they left the stage I acknowledged my sister and then I launched into the story of my first time on stage at a Cub Scouts Talent Show. I was maybe 10 years old and my sister dressed me up as girl in her black jumper complete with a little black veiled hat and she had me learn a song called “I Guess I’ll Marry Bill!”  Well, with my little boy soprano voice, I obviously won the talent show!”  It was quite a funny, unscripted moment for sure.

Just a Few of the Many

While so much work goes into the preparation, it’s ultimately the generous guests make the night a success. And it was!

Initially, 100 tickets were made available and 114 people attended the Gala. It was very intimate and as Rich said, “A big city Gala with a small town feel.”

All that fabulous food was DONATED by participating restaurants and their LABOR too.  Lincoln City’s Mayor and his wife were there (Mayor Dick and Sue Anderson), as were Oregon state democratic representative, David Gomberg and his wife Susan, and many of Lincoln City business people and residents interested in “Culture of Course!”

Many people knew each other. Not surprising, as Lincoln City only has 9,000 residents, it swells much larger in the Summer during high season.

Tech guru, Gray Eubank created a fantastic slide show all photos that played behind me while I shared the Harry Warren story. LCCC Board President, Greg Berton was instrumental on upright bass and Rick Modlin, who has played many of my past shows, reigned supreme on the keys.

Krista Eddy who curates the Chessman Art Gallery at the LCCC was in charge of decorations. Rosanne Berton was the Gala chair. They really out did themselves. It was one of the most entertaining galas we have ever been to. And Rich and I have been to MANY throughout the years with our philanthropic work!

Deep gratitude for the event photos provided by KRISTINCOLEPHOTOGRAPHY.COM. View Kristen’s work and learn more about her journey with her Pug, Cole – from the Midwest to their first steps onto the sands of the Oregon coast. “I use landscapes large and small to explore the importance of human visual perspective of nature as it informs the meaning of everyday life.” Begin a tour of Kristen’s portfolios here.

In addition to ticket sales, after the entertainment, guests placed final bids on must-have experiences in the “Culture, of Course!” live auction and the night was topped off in grand style with the winner of the 50/50 Raffle Grand Prize.  All told, guest donations in support of art and culture in the Lincoln City community, were exceedingly generous.

“An Affair to Remember,” indeed!

Photographs used in this post were compiled from various online sources. We believe in the proper attribution of material, and wherever we can, we do so. If you are the copyright holder of any photo on this page and would it to be removed or credited in a particular way, we would love to hear from you! Please be in touch.