Finally!  We were all together in Portland! With the help of technology, the new fundraising show “Oh, Those Gershwin Boy!” was put together even though everyone involved lives in different cities.  It was a memorable month of performances, and our afternoon at Lewis & Clark College in Portland was especially memorable to me. I had not performed on the campus since I’d graduated nearly 40 years earlier! I know I am dating myself, but it is what it is!

Being back in the extraordinary Agnes Flanagan Chapel was such a thrill. At times it felt as though I were 21 years old again; transported back through time to my college years at Lewis & Clark. Then, mid song I would open my eyes and see all the smiling faces just beyond the lights. Seeing all the friends and family members, I knew I wasn’t in Kansas any more! At the end of concert everyone clapped in rhythm for our encore… I don’t ever remember that happening before at any show and certainly a moment to remember!

I had to chuckle when they initially told me about the “Crooning the Classics for Charity” article in the Lewis & Clark Chronicle Magazine. What’s there to write about? And then I remembered, oh, I’m no longer that college kid going to class and singing in the choir, I’ve been out living life for (mumble) years, and perhaps Lewis & Clark alums may find the work I do, creating fundraising musical revues, an interesting read.

Pattie Pace did a terrific job on this well-written article. I was so pleased she placed such emphasis on my desire to raise money for charity; highlighting the fundraising shows that continue to move me toward my goal –  To raise 1 million dollars! I’m nearly half way there.

The afternoon at the Agnes Flanagan Chapel was made even more special by the fact that it was my mother’s 87th birthday.  At the end of the concert the orchestra played and the audience all sang happy birthday to her.  Little did I know that she would leave us less than four weeks later, so that memory of singing to her and seeing her wipe a tear from her eye will be with me forever.  She was such a darling mother and I miss her dearly.

“She was a mother who didn’t take any guff, gave us unconditional love, and had a home cooked meal on the table 90 minutes after she got off work every day. She taught us how to work, how to make a list, how to sing on pitch, and how to treat others. We all loved her fiercely. I’m pretty sure there will be fireworks tonight in honor of her passing.” ~SBB 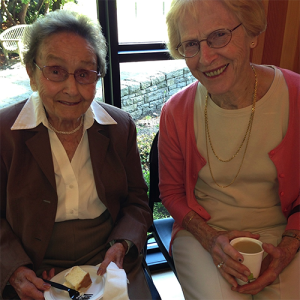 My darling mother, Eleanor Blumhagen (left) after the Gershwin concert at Lewis & Clark College on her 87th birthday. Elsie Williams (right), is the widow of Jack Williams, my first high school music teacher.

In the the summer of ’42, at the age of 16, my mother laid eyes on a handsome fellow, a hired hand working in her father’s golden wheat fields near Milton-Freewater. From the moment she first brought lemonade to my dad, it was love at first sight. Otto Blumhagen had stolen her heart. Three weeks later he was drafted and they were apart until dad’s return early in ’46. Within the year they were married.

My mother adored flowers and had a knack growing them. In fact, both of my parents shared a love of the land and believed in the preservation of the Walla Walla Valley. It seems fitting that they would have first met where they did.

Those wheat fields will always hold a very special place in my heart and the hearts of my family.

You are deeply missed. ~ Rocky

Ed Dixon - Manager, WW Symphony
Rocky’s evening of Cole Porter hit songs was polished, classy and heartfelt.  His singing brought back an era of musical delights when popular songs were truly works of art.  What a fun concert it was!!

Carol Boyle Schrader
What I love most about Rocky’s Kundalini Yoga sessions is that they made yoga accessible for me. Rocky made me welcome, suggested modifications and was so encouraging that it made me feel more confident. Rocky’s personal touch, deep knowledge of kundalini and zest for us all to live better is habit-forming (in a good way!). The breath work has eased my asthma symptoms greatly, which keeps me coming back for more!

Roberta - Stanford, CA
Rocky, I am so grateful to you for your expertise and your generosity as a teacher. The result for your students is a magical integration of body, mind, and spirit that leads to a more joyous appreciation of the world around us.

Kurt Alexander
I joined his kundalini class in September, 2019, and still practice with him at every opportunity. His practice, I find, is gentle for the elder person, like myself. It includes extensive meditation, especially with meditative breathing. I have always been a very factual, hands-on scientific type person. And I still am such a person. Rocky makes me see a bit beyond. He has made me think reflectively like I have not before. I value this expanded scope of vision. I thank him so much.

Noah Griffin - The Cole Porter Society
Your Cole Porter CD arrived but a week or so ago and it was worth the wait. The love and appreciation of his genius shines through in your arrangements and interpretation of his tmeless work. Your voice to me incorporates the best of Anthony Newly and Michael Feinstein. the cover art reflects the taste and sophistication of the composer you honor. Well done my friend and thanks for sending it along!

Suzanne
What a gift to be invited to share to share the rarified space with this wonderful group. While I have studied yoga for a couple years, I was new to Kundalini when I began classes with you, Rocky. I am so impressed with the Kriyas and the way you have woven them together to really give rotating attention to all areas of the body, mind, and spirit. Through meditation, breath-work, and some killer arm sets, I have appreciation for this new-found style of yoga and for you as our wonderful instructo… END_OF_DOCUMENT_TOKEN_TO_BE_REPLACED