The nature of my business is a bit different from some performers. Rather than a gig every weekend, it’s more about building a show and over time sharing it in multiple venues across the country. In doing this we are able to raise funds for many wonderful organizations, foundations, charities.

It’s a bit like a garden. Much of it takes place out of site and then one day… BLOOM! Here are upcoming opportunities to come smell the roses! 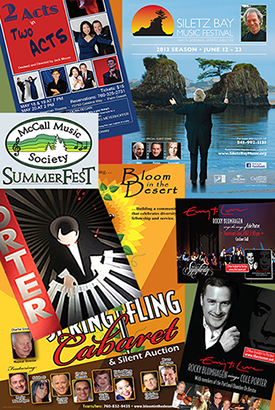 STAY TUNED for Additional Dates
throughout 2019

As additional dates are confirmed, they will be posted here.

An Affair to Remember

5th Annual Benefit Dinner & Auction for the LCCC – This Gala benefits the Lincoln City Cultural Center and raises money in support of art and culture in the local community.

Only 100 Tickets will be sold.

An evening bound to be… “An Affair to Remember.”

Need a little Perspective, Aspiration and Curiosity in your life? LOOK UP is an innovative and immersive new performance series about connecting humankind one experience at a time, hosted by Martuni’s Piano Bar (one of San Francisco’s TOP SEVEN PLACES FOR A FIRST DATE) every third Thursday of the month.

My Way: a Musical Tribute to Frank Sinatra

Prices reflect advanced and at the door tickets. Tickets are sure to Sell Out – Book yours soon.

Travelling to see the show? Consider making it a Holiday Getaway! Make a weekend out of it and take in all the area has to offer. I’ve pulled together some suggestions for local hotels, restaurants, and things to do while you’re in town! Click Here

Special New Year’s Eve Performance & Party
They tell me that New Year’s eve always sells out! It’s a Cinnabar tradition not to be missed!

Siletz Bay Music Festival: CONTRASTS
This evening of contrasts begins “On the Lighter Side” and ends “In Hot Pursuit.” Dick Hyman has once again composed a terrific grouping of songs and I’ll be joined by fabulous vocalists, Clairdee and Nicole Greenidge Joseph. I performed with these two beautiful women last year in Dick Hyman’s 2016 show, “On Wings of Shakespeare.” During the second half of the evening, “In Hot Pursuit” the legendary composer, Dick Hyman is here with his sidekick Jazz Impresario Clarinetist, Ken Peplowski, on stage with a sextet of instrumentals. All in all, an evening of phenomenal talent.

As additional dates are confirmed, they will be posted here.

Full EPK & Publicity Stills: Official EPK not yet available. Please contact Rocky directly should you have questions and check our EPK Page for general information about the show.

All are welcome to wear their finest holiday attire and join us
for the annual  “Home for the Holidays Fundraising Party”
and celebration for Unity San Francisco.

This Holiday season I am singing for a heartwarming Holiday party for Unity San Francisco. My good friends, Gregory Spencer and Ben Isaacs are hosting the party at their fabulous Pac Heights Penthouse with spectacular views of the City, Bay and Marin County.  The wide-open views and Gregory’s “artifacts” are worth the price of admission!  Enjoy a toast to the season with wonderful Christmas music and a few sing-a-longs for added fun. See you there! – Rocky

Sumptuous snacks and an AUCTION with fabulous prizes. Rocky Blumhagen & Danielle Kane with pianist Michael Grossman and possibly a surprise musician or two! While tickets are required, this is an open event and all are welcome to attend so bring your family, friends, neighbors – maybe you can make this a holiday gift to someone you love. This party WILL sell out – follow the Ticket Link below while they are still available.